The clinic specializes in implantation and prosthetics.
Home  /  Services  /  Prosthetics on implants 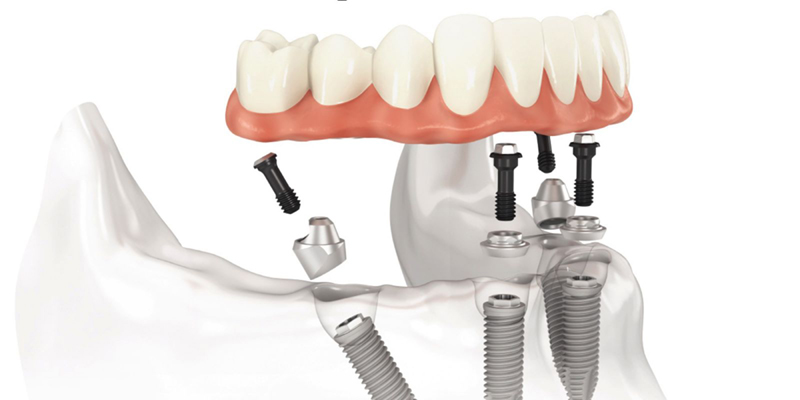 Today prosthetics on implants is one of the most effective technologies for restoring the integrity of the dentition. Unlike the widespread alternative of implantation - bridge prosthetics and clasp prostheses, the installation of dentures with the support of implants does not require grinding of adjacent teeth, and also fully restores the function and aesthetics of the dentition and allows for a more lasting result.

Stages of prosthetics on implants

Prosthetic on implants: benefits and types

Prosthetics on implants are actual both in the absence of one tooth and in full adentia. Implants act as a support for the construction instead of the native teeth in cases where the latter are absent or mobile.

Fixed prosthetics of teeth on implants

This type of prosthetics, as a rule, is used for small defects in the dentition. At the same time, one does not have to grind the neighboring teeth, which greatly prolongs their life.

Predominantly performed with complete absence of teeth or their minimal amount. The prosthesis is held on implants due to a micro-lock, one half of which is installed in the prosthesis, and the other half is in the upper part of the implant./p>

There are two types of fastening:

An economical option, with virtually no contraindications. Use mini-implants with a globular head, on which a plate prosthesis is attached. They are installed at one time through a puncture, without a gum incision. The diameter of the implant is only 1.8 mm.

Prosthetics on mini-implants are chosen for:

Thank you for leaving the application!

We will call you in the near future